Found at the outskirts of Europe, not far from Asia, the Rhodope Mountain range is partly in southern Bulgaria and partly in Greece. It is a borderland where the Mediterranean climate transitions into more of a Continental European climate, and altitude naturally also plays a role and contributes to the great habitat variation found here. The Rhodopes features open grasslands and river environments as well as impressive oak forests and beech forest, plus rocky slopes and sharp cliffs.

Many species that have gone extinct in other parts of Europe have survived in this sparsely population region, and the area has recently become a focus point for rewilding and nature preservation projects. The wildest parts of the mountains have been connected with each other through wildlife corridors to help the surviving animal populations, and buffer areas exist to ease the transition between wilderness and farmland.

In the 21st century, eco tourism has helped provide job opportunities in the Rhodope Mountains, which in turn eases the tension between traditional farming communities and groups who promote rewildening. The influx of visitors is also providing the local small-scale farmers with better opportunities to sell their products directly to consumers.

Bringing back the European bison to the wild

Once upon a time, European bison (wisent) was found in many different parts of Europe, and some finds indicate that they may also have inhabited Asian parts of Russia. Gradually, the populations declined and became scattered. One of the last few areas to have wild bison was the Polish-Lithuanian Commonwealth, and later Poland, as the rulers there took steps to protect the species. Another place where the bison population survived fairly long was Transylvania, where the last specimen died in 1790. Northern Caucasus and the Białowieża Forest by the Poland-Belarus border had bison into the 20th century. During World War I, occupying German troops killed approximately 600 bison in Białowieża for sport, food, hides and horns. At the very end of the war, retreating German soldiers shot all but nine animals. 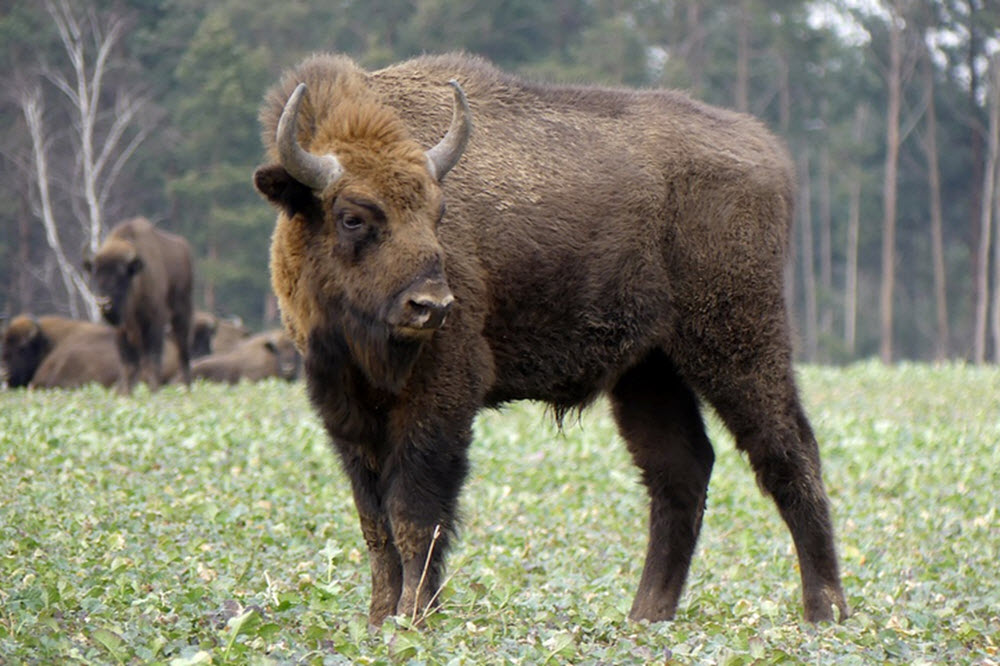 Fortunately, the species did not go extinct in captivity. Through captive-breeding programmes, their numbers have been boosted to several thousands, and steps are now being taken to return European bison to wild parts of Europe. One of these rewilding areas are found in the Rhodope Mountains.

European bison born in captivity was been released in the Rhodope Mountains since the 2010s and has formed a herd. In May 2021 a bison calf was born to the herd; the first European bison born free in Europe south of the Danube for several centuries.

Having European bison roam free like this have given researchers great opportunities to study bison and see how their natural instinct kicks in. For instance, the herd in the Rhodope Mountains do seasonal migrations to find food. In the fall and winter, they live in the lower parts of the Studen Kladenets area, but as the temperatures rise in spring they gradually migrate to higher elevations.

When it was time for the calf to be born in 2021, all female bison separated from the males and formed their own unisex herd. This was surprising to the researchers, who had predicted that only the pregnant female would separate from the rest of the herd. The calf was born, and lived with only female bison for two weeks. Two weeks after the birth, the females reunited with the males, bringing the calf with them.

European bison is keystone species for the rewilding of this part of the Rhodope Mountains and the goal is to have at least 50 bison living here.

The Rhodobe Mountain range is a part of the Rila-Rhodopean Mountain Massif, which extends for more than 40,000 square kilometres. The rewilding area in the Bulgarian part of Rhodope is connected to natural environments in the Rodopi and Orvilos Mountains in Greece. In the western direction, the rewilding area is not very far from the Northern Pirin and Rila Mountains, which are home to the Pirin and Rila National Parks.

Comments Off on THE RHODOPE MOUNTAINS