The goal of the Tauros programme is to use selective breeding to create a type of cattle that resembles the aurochs that once roamed Europe, Asia and Africa as a part of the Pleistocene megafauna. The wild aurochs are extinct, but the Tauros programme is hoping to use sturdy existing domestic cattle to create something similar to the aurochs. After all, it was the domestication of certain aurochs that led to the development of taurine cattle in the Fertile Crescent, and then a second domestication event further east led to Indian aurochs becoming the ancestors of zebu cattle.

Examples of traits that are believed to be typical for aurochs are sturdiness, large horns, dark colour in combination with a light eel stripe along the back of bulls, and cows being lighter in colour. There are still versions of domestic cattle that sports one or more of these traits.

The Taurus programme is an international cooperation between the Stichting Taurus foundation in the Netherlands and several universities, including the Wageningen University and Research Centre. The project was launched back in 2008, and by early 2016 it had reached its fourth cross-generation. Its older name is the TaurOs Project.

The aim of the programme is to release Tauros cattle into rewilding areas within the former range of the aurochs. There is also hopes to eventually have free-roaming herds throughout Europe that are not limited to specific isolated rewilding areas. Just like deer, elk and wild boar roams free today, we could also have tauros cattle. 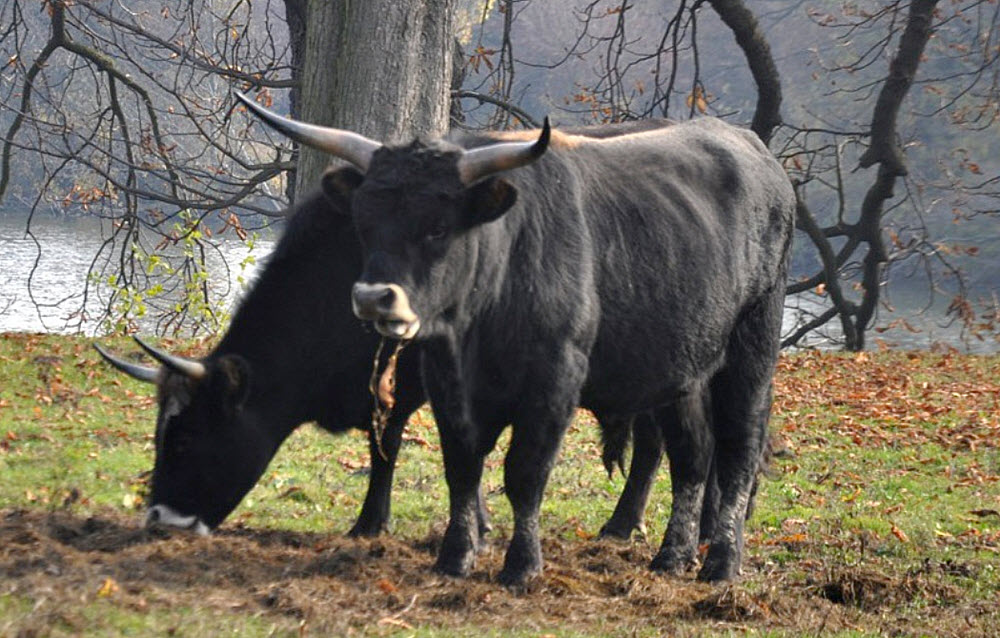 Heck Cattley is an attempt to backbredd the Auroch

When did the aurochs go extinct?

In parts of its range, the aurochs were already extinct several thousand years ago, but in other parts it persisted much longer, and there was actually wild aurochs living in eastern Europe as late as the 1600s CE.

The oldest known aurochs fossils found in Britain has been dated to 3,245 years before 1950, while certain populations of Aurochs in northern Africa are believed to have survived at least until the Roman Era, based in fossils found in the Nile Delta. In India, they probably went extinct around the 12th century CE.

During the time of the Roman Empire, aurochs were still widespread in continental Europe, but by the 1200s CE they were only found in Eastern Europe. Subfossil finds in Transylvania have been dated to 14th – 16th century, and in Moldavia to early 1600s.

The last known aurochs herd lived in a marshy part of the Jaktorów Forest in Poland. In 1601, only four individuals remained. The last aurochs was a female who died there in 1627, from natural causes.

Which breeds are used by the Tauros programme?

At the time of writing, nine different European cattle breeds have been utilized for the Tauros programme. All of them are hardy breeds known for their capacity to live outdoors year round in their region of Europe. The nine breeds are Boškarin (Istrian cattle), Highland Cattle, Limia Cattle, Maronesa, Maremmana primitiva, Pajuna Cattle, Podolica, Sayaguesa Cattle, and Tudanca Cattle.

The Netherlands is the epicentre for the project and had the largest number of Tauros herds, but herds also live in other parts of the continent, including both Eastern, Central and Southern Europe.

In the Netherlands, you can find Tauros cattle in the Nature reserve Keent (Oss), Herperduin-Maashorst (Oss/Uden), Kempen-Broek (Weert), Kraaijenbergse Plassen (Cuijk), De Maurik (Mill), and Geuzenbos (Rotterdam). If we move into Central Europe, there are two herds in the Czech Republic: one in the Milovice Nature Reserve and another one in Modrá (Uherské Hradiště district). In the south, herds are present in the Lika plains by the Velebit Mountains of Croatia, in Campanarios de Azaba in Spain, and in Faia Brava in Portugal. In the east, Tauros cattle has been living in Romania´s Sfântu Gheorghe (Danube Delta) since 2015.

Comments Off on TAUROS PROGRAMME