The Knepp Wildland is a 3,500 acre large rewilding area in West Sussex, England. Among other things, it is famous as a nesting area for white stork. When a white stork couple successfully raised offspring in Knepp in 2020, it was the first known stork hatching in England for approximately 600 years. Knepp is also home to introduced beavers; the first wild beavers living in Sussex for roughly 400 years.

Other examples of animals living in the Knepp Wildland are turtle doves, barbastelle bats and the rare legless lizzard Anguis fragilis. Purple emperor butterflies use it for breeding, and so do nightingales. 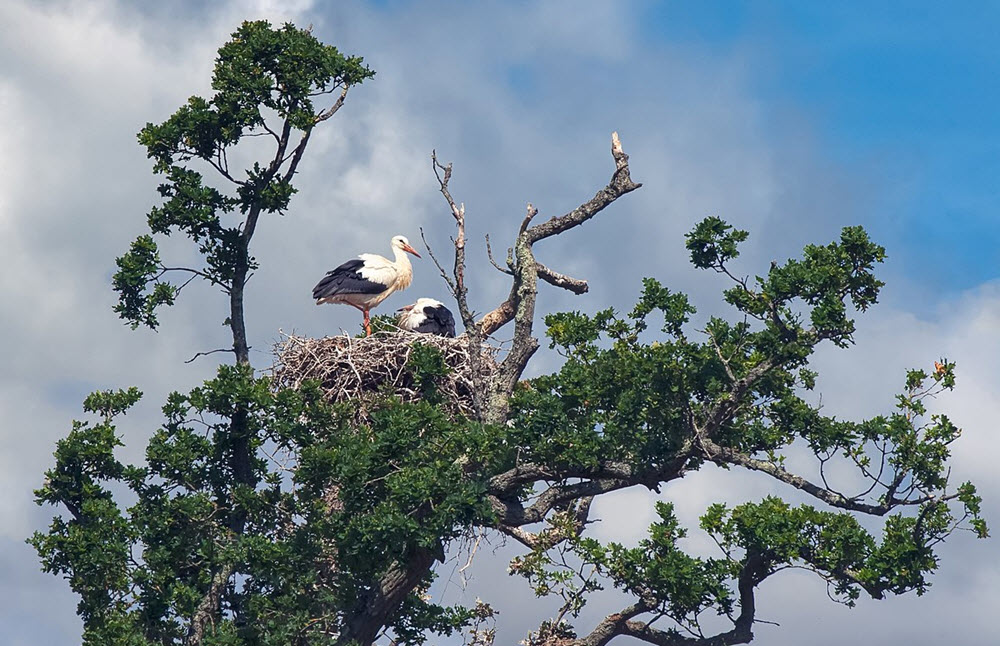 The White stork has been successfully reintroduced.

An important cornerstone in the rewilding of Knepp are animals that are actually not wild: sturdy cattle and ponies, who perform the grazing that was done here by wild mega-fauna species a long time ago. Knepp is also home to wild deer, but only having deer would not give the same impact as having the combination of cattle, ponies and deer. At the Kneep Wildland, focus is on restoring dynamic natural processes – such as the complex grazing habitat – rather than having things 100% wild or 100% prehistorically accurate. The Knepp Wildland Advisory Board includes roughly 30 ecologists to help get things balanced.

At Knepp, English longhorn cattle are used as a substitute for the extinct Aurochs and Exmoor ponies for the wild Tarpan horses that once lived here. Tamworth pigs fill the niche of wild boar, and them being allowed to live at Knepp also prevents this old domestic pig breed from going extinct. Tamworth pigs are not suited to modern commercial production methods and has therefore become rare in England and elsewhere. Their ginger to red colouration is believed to be a trait inherited from their wild boar ancestors.

For over 15 years, Burrell ran the farm according to contemporary commercial practises, but struggled to make it profitable. In the year 2000, he had to make a difficult choice, and elected to sell the diary herd and associated farm equipment to pay back farm loans instead of borrowing even more money to make new investments in an effort to increase production.

The 350 acres closest to Knepp Castle did not have a long unbroken tradition of being fields for growing food; they were only converted from castle park to farmland during World War II as the UK was struggling with food shortages. In the early 2000s, Burrell received Countryside Stewardship funding to change these 350 acres, and he turned the fields into meadows using a combination of grass seeds and local wild meadow seeds. The internal fences were removed, and local deer were introduced from nearby Petworth House.

This came to be the starting point for what eventually became a 3,500 acre rewildening area. Burrell travelled to the Netherlands where he was inspired by the Oostvaardersplassen nature reserve and the work of ecologists Dr. Frans Vera. In 2002 he brought English longhorn cattle, Exmoor ponies, fallow deer, red deer, and Tamworth pigs to the Knepp estate – all choices sturdy enough to handle a free-roaming life. The experiment went well, and in 2003 Burrell received funding from the Countryside Stewardship Scheme to rewild even more of this estate (the rest of the Middle Block and all of the Northern Block).

By 2009, it was clear that rare birds had begun to find Knepp and enjoy this new environment. Not only did they forage for food here, they were increasingly choosing Knepp for raising their young. This was the year when a raven couple was spotted nesting here; the first such occurrence on Knepp Castle land for hundreds of years. All in all, eleven bird species listed as UK Biodiversity Action Plan Priority Species were seen at Knepp in 2009. At this point, Knepp was also home to no less than 13 of the 18 bat species native to the UK.

The purple emperor butterfly is not your average butterfly; it lives chiefly in the three canopy rather than down in the meadows, and it gets most of its nutrients by eating dung and carcasses, and drinking oak sap and aphid honeydew. It favours dense and mature oak woodlands, and began showing up in the Knepp Wildland in 2009 – the same year as the first raven´s nest was spotted here in such a long time. (Six years later, Knepp would have the largest breeding colony of Purple Emperors anywhere in the country.)

In 2010, a study showed that not only was Knepp Wildland home to nightingales – it housed roughly 1% of all nesting nightingales in the whole UK. The following year, eleven male turtle doves could be heard singing at Knepp. This was excellent news, as this species is in rapid decline. In 1980-2013, the number of turtle doves sank by 78% in Europe. 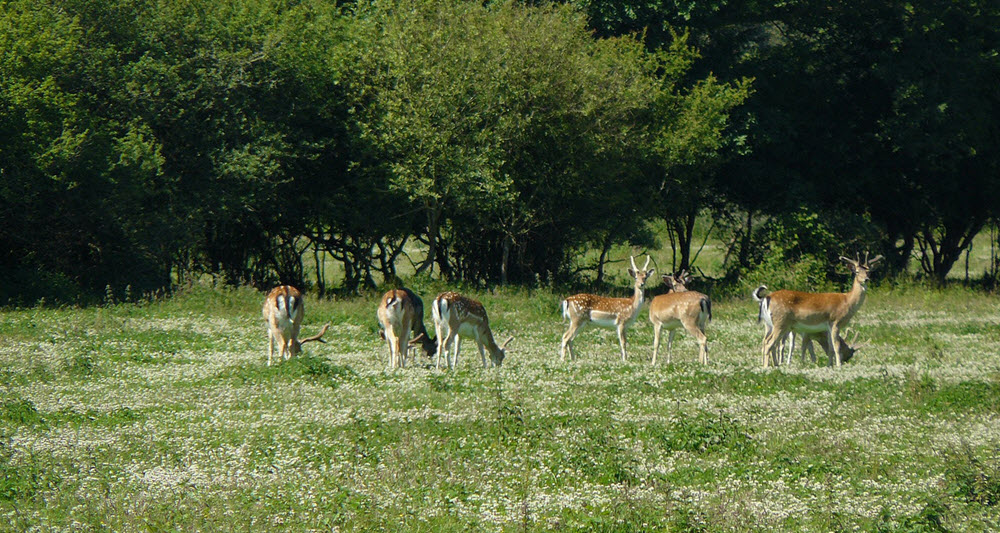 In 2012, the Environment Agency removed their big low head dam on the River Adur that goes through the Knepp Wildland and disabled their other dams. Within a year, Sea Trout was spotted migrating up the river.

In 2015-2016, surveys found an impressive variety of moths, bees and wasps at Knepp, including several species that were listed as having national conservation importance. In a world were bees are in sharp decline, over 60 different species of bee was spotted at Kneep Wildland.

In 2016, Knepp was home to its first nesting falcon couple. This was also the year when black stork was spotted at Knepp, which surprised everyone as this species is rarely seen anywhere on the British Isles.

Artificial banks were removed from the River Adur inside the Knepp Wildland. They had been created to prevent flooding of the farmlands, but now the wish was to restore the wetland environment by allowing the river to seasonally flood the nearby meadows. As an added bonus, allowing the river to flood naturally within the wildland decreased the risk of flooding neighbourhoods further downstream.

2020: Success with the white stork introduction

Knepp Wildland has a white stork reintroduction program where juvenile birds live in a large pen until they are ready to be released. In 2020, white storks nested at Knepp – for the first time in Britain in roughly 600 years. The last known breeding couple of white storks in Britain lived in Scotland in 1416, and the white storks stopped nesting in England even earlier than this.

Beavers were reintroduced to the river at Knepp in early 2020. It was done quietly, since the idea was to give the beavers a chance to settle down in the wildland without being stressed by curious humans. The beavers had other plans, however, and a male specimen quickly overrode the safety measures and went gallivanting outside the reserve – much to the surprise of local residents, as beavers were extinct from England in the 16th century.

Comments Off on KNEPP WILDLAND